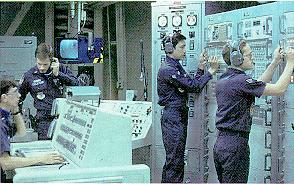 The Combat Crew was the heart of the Titan II operations. The Combat Crew was responsible for day to day operations of the missile complex as well as responding to the launch order that never came. Each crew consisted of two officers and two enlisted. The Combat Crews would arrive at a pre-departure briefing bright and early in the morning. During the pre-departure briefing, the crews were informed of the wing alert status, weather conditions, any hazards or major maintenance operations and other items which may effect alert status. After the pre-departure briefing, the Combat Crews would drive 20 to 40 miles out to the missile sites they were assigned. Once the crews arrived at the site, they would begin a changeover operation to relieve the former crew of command of the site. Each Combat Crew would pull a 24 hour shift at the site, followed by a 24 hour rest period. 8 alerts a month and several training days were typical for most Titan II Combat Crews. 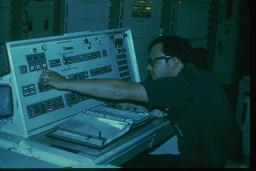 The MCCC was the officer in command of the missile site. This position is comparable to that of a Captain of a ship or pilot of an airplane. Even though a higher ranking officer may be present, the MCCC is still in command of the site. Being an MCCC was not an easy assignment. Besides having the responsibility of a nuclear missile at his/her command, the MCCC was responsible for the safety and well being of the Combat Crew, maintenance teams and all other personnel on site. All operational decisions effecting the missile site were made by the MCCC. Communications with the other Combat Crew members, maintenance teams, security and other personnel on site was essential for the MCCC to make the correct decisions. Operational procedures and emergency situations required running checklists maintained in Technical Order manuals. The MCCC was responsible for ensuring the Technical Order manuals were followed. The MCCC was usually a Captain (O-3) or Major (O-4) in rank, but a First Lieutenant (O-2) or a Lieutenant Colonel (O-5) was not uncommon. The MCCCÆs primary position was manning the Launch Control Complex Facilities Console (LCCFC). The LCCFC was designed to give the MCCC overall status of the complex at a glance. It was also the primary console that contained the MCCCÆs launch key switch and launch status display.

The DMCCC was responsible for communications and monitoring the location of all personnel on site. The DMCCC was also the second in command and would take command in the event the MCCC was to become incapacitated or unable to perform his/her command duties. The DMCCC was usually a Second Lieutenant (O-1) or a First Lieutenant (O-2) and sometimes a Captain (O-3) in rank. The DMCCCÆs primary position was manning the Alternate Launch Officers Console, Primary Alert System, VHF, UHF and SSB Communications Console. The MCCC depended on the DMCCC to track and monitor all personnel on site, and monitor maintenance operations. The DMCCC was also responsible for relaying communications with command centers, maintenance teams, aircraft, etc. The Alternate Launch Officers Console contained the DMCCCÆs launch key switch.

The BMAT, also known as the Missile Systems Analyst Technician (MSAT), was responsible for missile site electronics, launch system electrical and missile airframe and electronics. The most important responsibility of the BMAT was maintaining the missile airframe and electronics. This included the guidance system, R/V (warhead), engines, etc. The BMAT was usually an Airman Second Class (E-2) up to a Technical Sergeant (E-6). However enlisted men of all ranks were not uncommon. The BMATÆs primary position was manning the Control Monitor Group (CMG), Missile Fault Locator (MFL), and the Missile Guidance Alignment-Checkout Group (MGACG). From these consoles the BMAT could identify and troubleshoot problems with the primary missile and launch systems.

The MFT was responsible for the missile site facilities, including heating and air-conditioning, power generation and control systems, plumbing, water systems, utility air compressors, hydraulic systems and all other facility related systems. Because the missile launch systems depended on many of the facilities systems being in perfect working order, the MFT, with help from the BMAT, inspected all facility systems once per day during Daily Shift Verification (DSV). As the facilities systems consisted of many fans, motors, pumps, valves, etc., DSV would take between 2 to 6 hours to complete. DSV was the most important daily operation completed by the Combat Crew and most of the DSV procedure were the responsibility of the MFT. The MFT was usually an Airman Second Class (E-2) up to a Technical Sergeant (E-6). However enlisted men of all ranks were not uncommon. The MFTÆs primary position was manning the Facility Power Control Board (FPCB), Power Distribution Control (PDC). From these consoles the MFT could identify and troubleshoot problems with the primary facility systems. 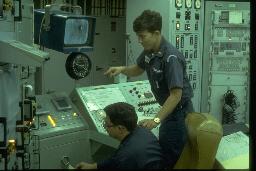 The Combat Crew required extensive training in missile systems and operations before being allowed to man a missile complex. Each crew member completed preliminary training for missile systems at Sheppard Air Force Base in Wichita Falls Texas. The longest training was for the BMAT at approximately seven months. After preliminary training, operations and launch training was completed at Vandenberg Air Force Base, Calif. Operations and launch training consisted of classroom and on-site training, as well as many hours in a simulator called the Missile Procedures Trainer (MPT) This training lasted for about 6 weeks. Completing training at Vandenberg AFB was not the end of training for the Combat Crew. Once assigned to their squadron at one of the three operational bases, the Combat Crew still had to complete several months of "upgrade" training and pass a grueling evaluation prior to being assigned to their first crew. Upgrade training consisted of classroom, on-site and MPT time with an instructor that was assigned to an operational instructor crew. Training for the Combat Crew never ended. Crew members were required to spend one session in the MPT and complete homework assignments each month. And on occasion spend time in classroom training. A annual evaluation was required by each crew member to maintain alert status. This evaluation consisted of Missile Procedure Trainer (MPT) time and an on-site evaluation. The Combat Crew was required to perform a series of simulated emergency, launch and wartime procedures with a minimum of errors.


Please ask permission to use content including pictures and graphics.
® 2007, Copyright by Donald Boelling